Angaria was a young girl born of a father who ruled a cold and northern land.  In the winter of the third year of her life, her mother came sick and was struck down.  Her father was never quite the same after that.  Losing the 1 true love in his life caused him great pain, but he tried to fill the hole in his heart with his daughter and she became his world.

Angaria grew to a beautiful young woman.  Although she was proud of her royal heritage she never treated people as if they were beneath her.  Her father taught her to treat the people well and she always understood that her primary duty lay in the welfare of her people.

The 17th year of her life brought a change to the kingdom.  Rumors of southern unrest brought stories of a civil war.  The king sent riders into the southern marshes and most were not heard from again.  Still, a few men did return with information about what was happening.

An unknown queen was annexing the various kingdoms and duchies to the south.  She led a vast host of warriors against the southern kingdoms and where her army went, none could stop her.  In the van of her army marched all manor of dark forces.  Trolls and goblins and other fie creatures led her armies and where they walked none could prevail.

Angaria’s father, King Nathon levied his northern duchies and the barons of Northern Tearia marched in the spring of 3167.  He sent riders to the land of the Elves and for the first time in over 1000 years, the white Faerie gathered their archers to join the host of man.

Summer 3167 saw the elves and northern armies approaching the capital city of Lifteria to join the king when tragedy struck.  The king was leading his local troops in horsemanship and archery practice when a Yalta Troll charged the warriors.  The troll was swift and he went right for the king.  The kings guard were struck aside with vicious blows of the troll’s club as he bore down on the king’s horse.

Nathon shrugged his shoulders to set his armor and pulled his lance to a ready position.  Then he spurred his mount and charged the fie creature.  Although it was a short charge, the experienced knight stood and crouched in his stirrups at thew last minute in order to gain power as he approached the animal.

His aim was true and his lance was buried deep and broke in the troll’s side.  However, as the king came even with the troll, it struck out with it’s club and managed to hook the king out of his saddle.  Nathon was thrown to his back on the ground and he lay stunned for a brief moment.  Then he scrambled to his feet and drew his sword.  As he turned to face his opponent it was almost too late as the maddened beast charged him.  It seemed that the lance only served to further anger the creature as he met the king.

The fight was brief and one sided.  As everyone knows, you can’t fight a troll on even footing.  When it was over, the King lay in a broken heap mortally wounded.  As the light faded from his eyes, tears fell unnoticed.  When he drew his last breath, his daughter’s name on his lips and a vision of his long lost wife before his eyes, he couldn’t hear his men as they arrived to fight the troll.

The new queen barely had time to mourn her loss as her northern army and the elves arrived.  She was forced to horse in order to meet the enemy who had killed her father and destroyed her world.

As she began her march, Angaria wiped away her tears and a cold abiding hatred filled her heart as she rode out at the head of her forces determined to destroy the armies of the white queen.

Based on a Concept by
Lexy Page 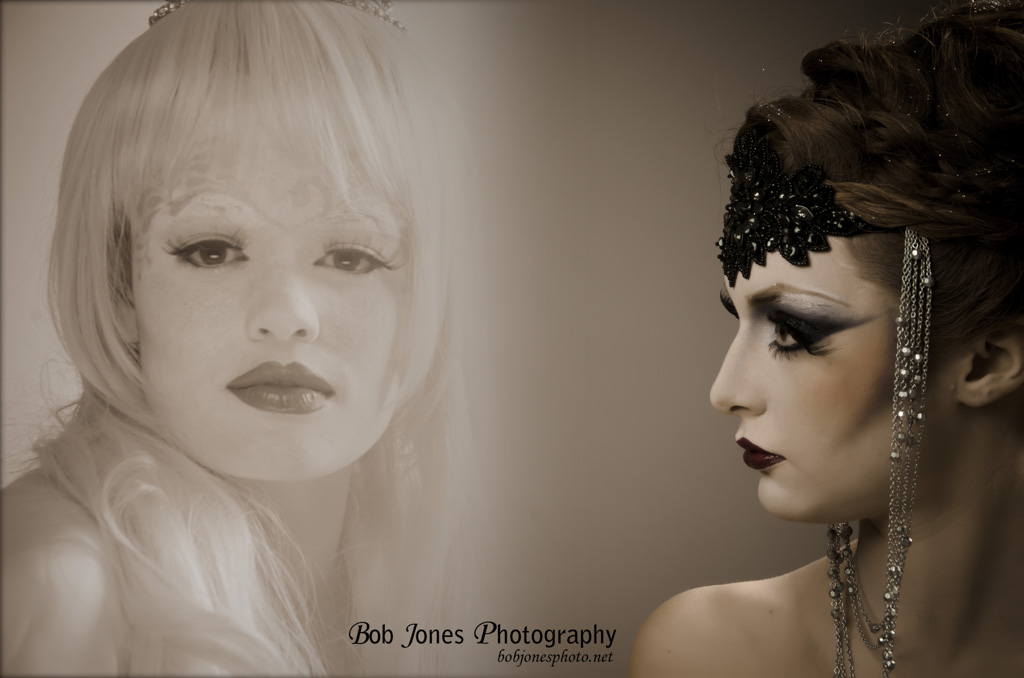 The following information comes from various Web pages and helps to explain SOME of the basic elements of good composition & photography. These elements are true in all forms of photography whether it’s architecture, landscape, or photographing people & models. These rules are as old as paint and canvas and really stand at the core of how our eyes processes imagery. It should also be noted that you should also know when to break these rules.

RULE OF THIRDS The rule of thirds has been used through the centuries and is probably the most recognized rule. The rule of thirds directs that the frame can be divided into three vertical sections and three horizontal sections. Wherever the separating lines connect is an ideal spot for a subject or point of interest. By positioning your main subject at any of the four intersection points, you are giving your subject more emphasis than if it is right in the middle of the photo. The intersection points can also work if there is more than one main subject in a photo. Most famous photographs and paintings have the rule of thirds applied to them in some way or another

SIMPLICITY The simplicity rule directs that you should keep the items in your photo relatively simple. If your main subject is close to the lens, then your background should be very simple in order to avoid distractions. Another good idea is to avoid objects or lines that lead the eye away from your main subject.

CONTRAST The contrast rule directs that light subjects should be placed against dark backgrounds and vice versa.

FRAMING The framing rule directs that using natural surroundings mindfully can add more meaning and focus to your subject. The surroundings could be anything such as bushes, windows, trees or even a doorway. When using this rule be sure to focus on the main subject and not on the surroundings that are framing it. It is also a good idea to use a narrow aperture (high f/stop) when using this rule in order to create a high depth-of-field.

TEXTURE The texture rule can add a great amount of interest to most photos. When people see texture in a photo it can spark their imagination and make the photo more real to life. Texture would be a good idea when taking photos of rocks, walls, surfaces, hands or even leaves. In order to create texture try to compose your photo so the light is coming from the side and therefore casting shadows in key places.

LEADING LINES The leading lines rule can be used to direct the eye deeper into a photo and commonly to the main subject. Leading lines can lure the eye to a subject by leading to it from any side or depth of the photo. Leading lines could be roads, rivers, tree branches or even bridges.

COLOR The color rule is what adds interest and emotion to your pictures. Different color configurations can inspire and amaze viewers. Colors can also be used to accent certain parts of a photo.

From Bob J About color: In some instances, the absence of color, through the use of black & white images can also create an emotion. Color creates an overall tone or theme, and effective use of color or black & white can set the tone or emotion of the image.